This year we wanted to wear something a little different for the 4th of July, so we undertook this easy t-shirt craft after seeing a friend post a picture of her son wearing one. It takes only a few minutes apart from drying, & you can even “girlify” it with a little ribbon! I took sharp scissors & snipped small cuts in the shirt, either on the front pocket, or around the neck. Just make sure you have an even number. Thread the ribbon through & tie into a pretty knot or bow, then squeeze a little hot glue inside the knot to keep it from untying in the wash. Now, if your little girl has an abnormally large head like mine does, you may want to snip the ribbon where it doesn’t show & safety-pin it after she pulls it over her head. Didn’t think about the fact that it needed to stretch… Whoops!

Now on to painting!

If you’re looking for a place to wear your new shirts, how about organizing an indoor “parade” through a nursing home? That’s what we did yesterday, & it was a wonderful experience. We rounded up some friends from our MOMS Club, decorated up our wagons, waved some little flags, & played “Stars & Stripes Forever” on repeat on my iPhone with some little speakers as we marched through the halls. The residents were very appreciative of visitors, & it was a great experience for the kids! They loved marching & getting so much attention, & it was a great teaching moment about how good service can make us feel. My 4-year-old kept saying, “Mommy, they’re so happy to see me!” 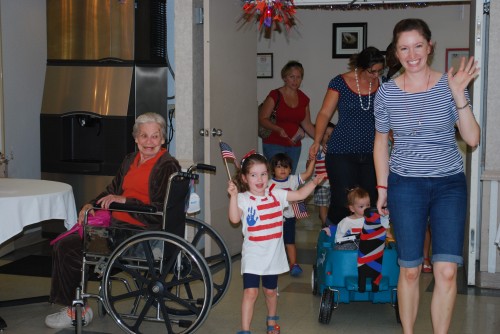 Where will you wear your patriotic shirts?

Happy Flag Day! It’s actually tomorrow, but I’ve been so excited to share this recipe that I couldn’t wait one more day. Flag Day, every June 14, celebrates the day in 1777 that the Second Continental Congress adopted the American Flag. Though it’s not a national holiday, it’s a significant day in our nation’s history, & especially since it falls just about halfway between Memorial Day & Independence Day, it’s a great day to feel a little more patriotic!

That’s why I’m sharing this potato salad with you.

Summer seems to be the “official season” of potato salad, with all of its picnics & potlucks, but those pesky health code restrictions kind of get in the way, don’t they? Keep it cold. Don’t let any potato salad with eggs in it sit out for too long. Etc. That’s why this is the perfect potato salad! Number one, it’s not made with eggs, so you don’t have to worry about it spoiling. Number two, it’s actually designed to be served warm (even though it still tastes great cold), so it’s just fine at a picnic on a hot day! I thought you couldn’t get any more perfect than that… until I realized I could make it red, white, & blue.

You can buy blue potatoes at most higher-end supermarkets — I got a bag of reds, blues, & a few Yukon Golds at Whole Foods. Blue potatoes are fun, tasty (a little heartier than a standard new potato), & will be a great conversation-starter at your next potluck!

Those of you who’ve been around here for awhile may recognize this recipe as the potato salad served alongside these slow-cooker-braised chicken thighs. I just swapped in some blue potatoes, served it with my mom’s BBQ beef sandwiches, & had a whole new meal! 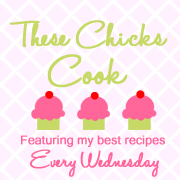